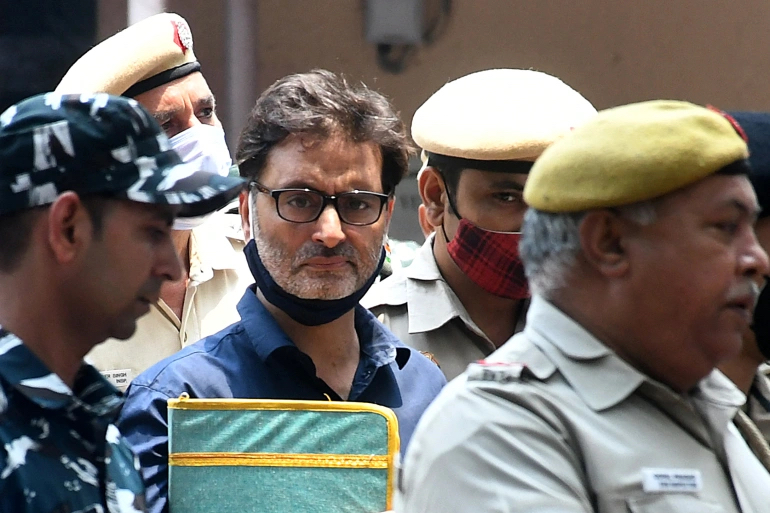 The judgement of Supreme Court releasing A.G. Perarivalan, convicted in the case of Rajiv Gandhi’s assassination, has been widely hailed as upholding the human rights of prisoners. Yet, Yasin Malik, Kashmiri separatist leader, has been given two life terms and there is hardly any debate on him. At the same time Government of India is engaged in a dialogue with leaders of National Socialist Council of Nagaland (Isak-Muivah) trying to find a political solution to Naga problem. Nagaland had attracted Armed Forces (Special Powers) Act much before it was used in Jammu and Kashmir, both on account of being disturbed areas.

Yasin Malik, the leader of Jammu and Kashmir Liberation Front, was a militant till 1994, after which he decided to give up violence and espoused Gandhian philosophy. Along with Syed Ali Shah Geelani, Mirwaiz Omar Farooq, Shabir Shah, Yasin Malik comprised the most credible Kashmiri separatist leadership, who certainly had more following than the mainstream Kashmiri political leadership. Among the separatist leaders he was the most probable to have come around to work with the Government of India to find a political solution to the Kashmir problem. That is likely the reason why various Indian Prime Ministers engaged with him, just like they engaged with the NSCN (IM) leadership. How many Kashmiri separatist leaders do we know who publicly turned Gandhian after pursuing a path of militancy? It was Government of India’s failure that they could not keep Yasin Malik engaged like they have done with NSCN (IM) leadership and allowed him to drift out of its orbit.

The NSCN (IM) entered into a cease fire agreement with Government of India in 1997. Nagaland has witnessed the longest running insurgency movement in south and southeast Asia. All allegations that have been made against Yasin Malik – seeking foreign funding for fomenting trouble in India, striking at the heart of the idea of India , intending to forcefully secede from Union of India – can be leveled against Naga leadership too if the Government of India chooses to do so. But the Government treats Naga leadership with respect. In 2015 it entered into a Framework Agreement in the presence of Narendra Modi ‘…respecting people’s wishes for sharing the sovereign power…’ hoping for ‘…an enduring inclusive new relationship of peaceful co-existence of the two entities.’

Why are the people’s wishes in Kashmir being trampled upon by the Government of India? It doesn’t even seem to recognize that there is any entity other than itself that it should talk to in order to resolve the problem of Kashmir just like it seems to be doing in Nagaland.

By abrogating Article 370 and 35A the government of India took away the separate flag and Constitution of Jammu and Kashmir. But it is currently negotiating with NSCN (IM) on the demand of a separate flag and Constitution, Yehzabo, without which the Naga leadership says there can be no political solution. The common Naga sentiment supports this idea. The Government of India has come around to accepting the Naga flag as a cultural flag. But the Nagas insist that it is their political flag.

Why is the government of India treating Kashmir as a shut case and at the same time being flexible and exploring possibilities with Naga leadership?

While it is appreciable that it is willing to hear people’s voice in Nagaland, it is regrettable that it is not even willing to recognize the mainstream political leadership in J&K. It is not clear how it hopes to achieve anything by ignoring Abdullahs and Mehbooba Mufti on one hand and trying to make a terrorist out of a separatist leader like Yasin Malik. How can any political solution be arrived at without engaging the political leadership, mainstream or otherwise, in J&K?

Yasin Malik too has human rights like A.G. Perarivalan and deserves to be treated with the same respect as Thuingaleng Muivah, incidentally the Ato Kilonser or Prime Minister of the parallel government run by NSCN (IM) in Nagaland called the Government of the People’s Republic of Nagalim. Just as the Government of India sees hope in resolving Naga political issue by engaging in dialogue with NSCN (IM) leadership it should rethink its strategy in J&K and engage the leadership there to resolve the political problem of J&K.

Yasin Malik, an avowed Gandhian, is a hope for people of J&K as well as India. When Nelson Mandela was sent to jail in South Africa he was considered a militant. He was the founder of militant wing of African National Congress, uMkhonto we Sizwe, but later became a pacifist. He formed Truth and Reconciliation Commission to grant amnesties to people who committed crimes during the apartheid rule. It was because of him that a peaceful transition of power could take place from the apartheid era to the first representative government of South Africa.

Yasin Malik’s case should be treated sympathetically as he has pleaded guilty, which is very unusual. This shows that his commitment to Gandhian values is intact. Yasin Malik was not a separatist to begin with. It was his bitter experience in the 1987 rigged elections when he was polling agent for who later became Syed Salahuddin, that Yasin Malik turned a separatist. In 2007 he took out a padyatra ‘Safar-e-Azadi’ to mobilize a signature campaign on the demand of involving people of J&K in the dialogue process to resolve the Kashmir issue. The Government of India needs to be creative and explore the possibility of Yasin Malik playing a larger role in resolving the Kashmir issue rather than treating him like any other terrorist.

RELIGIOUS ISSUES COVER UP THE GOVERNANCE FAILURE IN UP