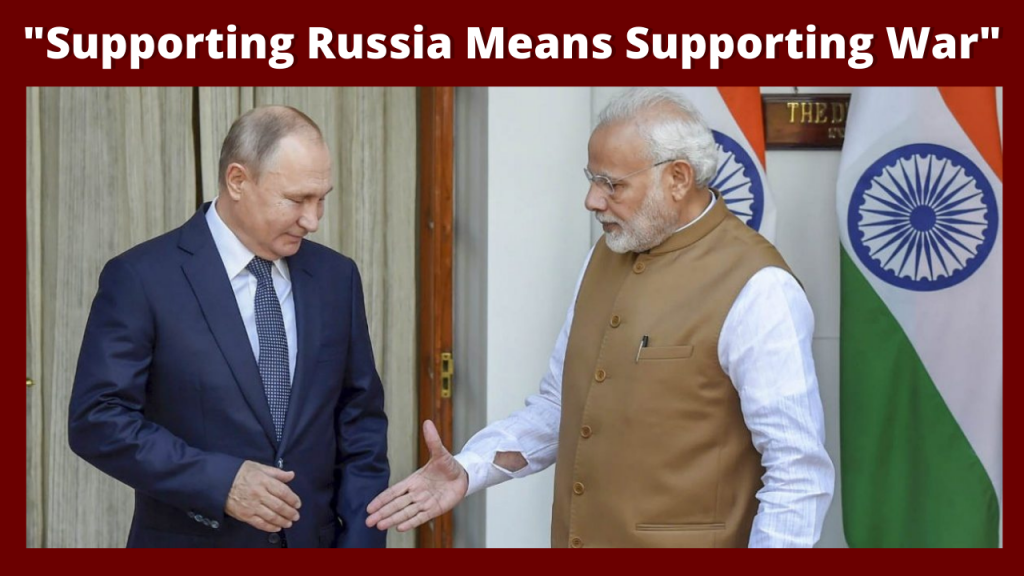 There are two narratives about the Russia-Ukraine war in circulation. One is projecting invading Russia as the villain and demanding immediate cessation of hostilities. Second is holding United States foreign policy responsible for this which even after the cold war got over in 1991 was unnecessarily trying to provoke Russia by trying to expand North Atlantic Treaty Organisation making the new states which emerged from Union of Soviet Socialist Republic as its members. Russia felt insecure at the possibility of Ukraine joining NATO and this became the cause of present war.

It is interesting to recall that when USSR was dissolved its 35,000 nuclear weapons were shared by Russia, Ukraine, Kazakhstan and Belarus. The last three nations did not find any use of them and handed them over to Russia. Although, Ukraine did ask for security assurances and an agreement was reached with the mediation of US and United Kingdom.and US also helped Ukraine dismantle its nuclear weapons. Ukraine realised that it was not feasible for it to maintain the nuclear arsenal as well as guarantee its security. Moreover, US and USSR/Russia entered into treaties which reduced the number of nuclear weapons significantly.

Also Read:  1. Operation Ganga: A PR exercise gone wrong
2.  Rona Wilson: Who Worked For Release Of Political Prisoners Is Now A Victim
3. COVID LOCKDOWNS OFFERS AN OPPORTUNITY TO REORIENT OUR IDEA OF EDUCATION

This reflects the mood of the time when cold war ended, especially the countries part of former USSR did not expect to get involved in wars in near future and were ready to give up their weapons. Ukraine assumed that in exchange for giving up its nuclear arsenal its security would be ensured.

However, the US and Russia continued to hold on to about equal number of nuclear weapons, around 5000-6000, amounting to 90% of total nuclear weapons in existence. This has ensured that total and lasting peace would not prevail. Moreover, while the five permanent United Nations Security Council members, all of them nuclear weapons states, did not give up their nuclear weapons, they expected other countries to sign Comprehensive Test Ban Treaty and Non-Proliferation Treaty abjuring the right to possess these weapons. Israel, India, Pakistan, North Korea and Iran defied this order and produced or have the capability to produce their nuclear weapons.

US ambition to remain the only super power post cold war and its reluctance, along with that of other permanent UNSC members, to completely dismantle their nuclear arsenal as well as other weapons of mass destruction, triggers wars every few years somewhere in the world and sustains the military-industrial complex, backbone of its economy.

Rajeev Gandhi was the last Indian Prime Minister who attempted convincing nuclear powers to give up their weapons in United Nations General Assembly. Being unsuccessful, the Indian government decided to go ahead with production of its own nuclear weapons. Indira Gandhi had already carried out the tests two decades earlier.

With the adoption of neo-liberal economic policies India decisively moved from the Non-Aligned Movement camp to being a friend of the US. Had India been part of the NAM, it would not have found itself facing the predicament where it cannot criticize the aggressor Russia in the present conflict and will possibly annoy US for not supporting Ukraine.

Traditionally, India is known to stand for the right of oppressed. Mahatma Gandhi criticized the forcible creation of Israel in Arab land and India boycotted the apartheid South Africa. It gave refuge to Dalai Lama and allowed Tibetans to form a government in exile, which still exists, and stood in support of Bengali nationalism facing attacks in Pakistan.

Today the world is devoid of a moral voice. UN has been made irrelevant first by US, UK and China and now by Russia because of the veto power possessed by permanent UNSC members. The powerful countries give two hoots to the international opinion. Unless the UN, especially the UNSC, is democratized there is little hope that international opinion can prevail and halt wars like the present one.

Had India followed the principle of non-violence, for which Mahatma Gandhi is revered globally and is an inspiration for all oppressed people, we would not be seen as soft towards Russia, clearly the oppressor in the current conflict. Had India persevered with NAM and built it as a block of nations which could have exerted pressure on the powerful countries to change their behaviour it could have resulted in a qualitatively different world order. Instead, India is pursuing a self-defeating dream of a permanent seat in the UNSC and realsing that it’ll never be part of G8 it has chosen to be part of alliances like BRICS and Quad to fulfill its ambition of being a second rung power in the world, if not the first.

It is not just the Indian students stranded in Ukraine who deserve our support, where all our attention is presently focused. We need to think about those Ukrainians who do not have the luxury of fleeing their homeland. Their lives have been devastated by the Russian attack and their future is uncertain. To be without a shelter in extreme cold can be a very miserable feeling. They have already started running out of food supplies. And there are little children among the stuck population.

It is a humanitarian crisis. We need to stand solidly with Ukrainians and compel Russia to stop this war. War can only beget violence and misery. It cannot be justified in any name. Instead of trying to imitate the world powers, India would do well to take an independent stand and work towards a word free of dangerous weapons. Only in a world free of weapons and armies can we hope to have enduring peace and friendship between countries.