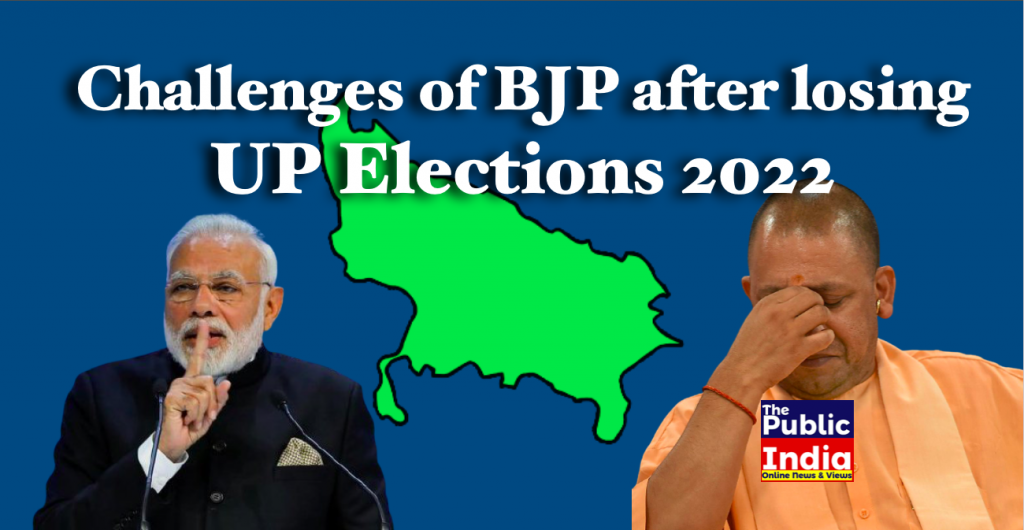 Grave challenges ahead for BJP if it loses UP Elections 2022

No wonder Uttar Pradesh is said to be the “Road to Prime Minister’s Chair” as the most populous state of India has 80 Loksabha Seats 403 Assembly Seat and winning or losing this giant has a lot more meaning than any other state in India.

As UP Assembly Elections 2022 are in culminating on 7th of March and so far the news for BJP has not been good, rather there is an apparent edge to Samajwadi Party in the leadership of Akhilesh Yadav.

2 ladies are also grabbing their bite as Congress in the leadership of Priyanka Gandhi Vadra and Bahujan Samaj Party led by Mayawati are also seem to perform better than hoped. At least, they are no good news for BJP.

Now if BJP loses UP Assembly Polls, there are going to be cascading effects for BJP, and let’s have a look at them-

Let’s go to the memory lane when after winning the 2017 Assembly Elections with a thumping majority, BJP tried to make Manoj Sinha (now the Lt. Governor of Jammu & Kashmir UT) but it is said that Yogi Adityanath put his foot down and snatched the CM Chair from Sinha.

There was no problem for BJP Leadership as Yogi Adityanath suited them to pursue their Hindutva agenda as a saffron-wearing seer Yogi Adityanath carried an image of hardcore rightwing politics and a descendent of Mahant Avaidyanath, who was one of the most instrumental leaders in Ayodhya Ram Mandir Movement.

For the last 5 years, time and again Yogi Adityanath proved his utility and remained the biggest mascot of Hindutwa. He used to go to other State Assembly Elections and as usual, he delivered speeches he is known for. Amusingly, he was sent to Kerala Elections where there is no such politics is praised. However, BJP’s narrative proved to be disastrous for them.

So, if BJP loses UP Polls 2022, there will be a big question mark on Yogi’s style of politics which is limited to 80% vs 20%, Thoko (Encounter) Policing and demolishing houses by Bulldozers as he never focussed on real issues like employment, stray cattle, and infrastructure. Taking inspirations from Prime Minister Narendra Modi, he also organized large-scale events like Investor Summit and Defence Expo which yielded nothing, and taxpayers’ money was wasted like anything.

2- Tough days ahead for Narendra Modi

Elections are fought on perceptions and there is a general perception across the country that if Yogi Adityanath is going in 2022, Narendra Modi is also not coming back to power in 2024. This is going to be the biggest challenge for BJP to save itself from this perception.

Narendra Modi, who once used to have remedies for every illness, never lived up to the people’s exceptions. Now, he doesn’t talk about some of his most shouted issues like Black Money, Corruption, China, etc. He could not make a single start which is his own brainchild or implemented successfully and the public at large are benefitted.

He just remained the old schemes of the UPA Government (some with the malign intension) and one thing which he did from his own idea was Demonetisation which proved to be disastrous for the people of India. The economy almost collapsed and businesses like real estate are yet to recover from this ‘masterstroke’ of Narendra Modi.

Implementing GST with 4 slabs in one stroke was another classic example of Narendra Modi’s bad governance and there are numerous such actions of him, some known to common people, some not.

As of today, people don’t seem to be angry with Narendra Modi but they are sitting on the verge of getting angry. People have lost their jobs due to mishandling of Indian Economy, people have lost lives, their kins due to Covid Mismanagement so there are enough reasons when people can start thinking that enough is enough, let’s stop talking about Ram Mandir & Pakistan and start talking about jobs!

So, UP Assembly Polls are going to be the most crucial juncture for Narendra Modi as if BJP loses 2022 UP Elections, this can wake people up and start asking for jobs.

Another challenge that is BJP is going to face is the Presidential and & Vice-Presidential Elections which are due in July and August 2022, respectively. Looking at the current numbers of MPs, MLAs, and MLCs in states, BJP will be struggling to win these elections if they lose UP Elections 2022. The UP loss will certainly affect the fence-sitting parties who had supported NDA in Presidential and & Vice-Presidential Elections last time but if BJP loses UP Elections and the mood of the nation changes against BJP, it will be hard to anoint a President and Vice President of BJP’s choice.

As data suggests, if BJP comes below 150 in UP, the President will be elected from the opposition side and this will be a big blow to BJP. To understand the arithmetic of Presidential Elections, Watch this episode of What Does This Data Say-