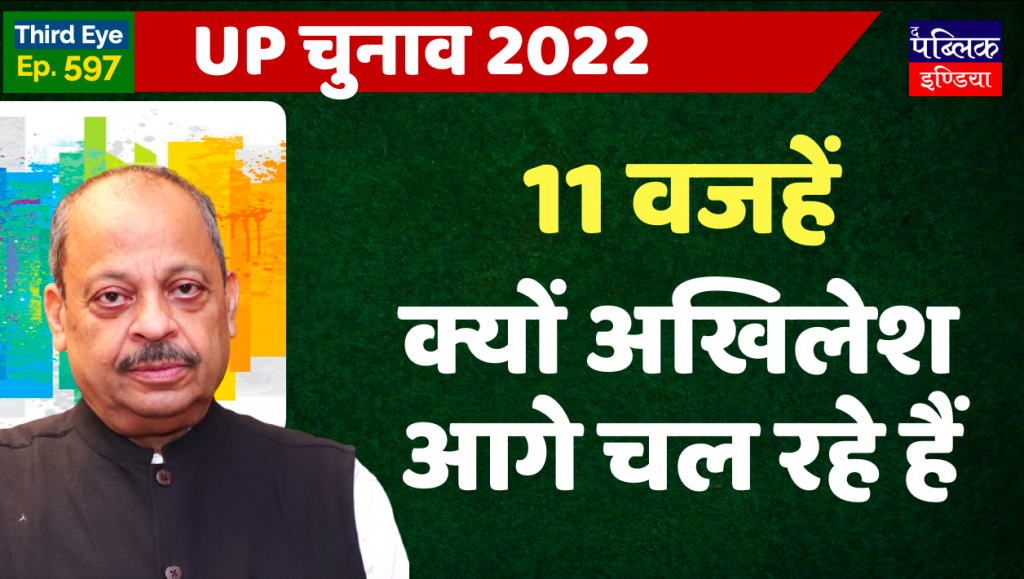 UP Elections 2022: 11 Reasons why Akhilesh Yadav is ahead of BJP | Watch Video

As the Assembly Elections in Uttar Pradesh are undergoing and 2 Phases of polling have been completed, the third phase of polling is due on 20th February 2022. Looking at the current scenario, Akhilesh Yadav, National President of the Samajwadi Party seems to be ahead of BJP. Reportedly, when the elections began, BJP hoped to get a pace from Jat land of Western UP but things didn’t go as per the BJP exceptions. Let’s understand in 11 points, why Akhilesh Yadav is ahead of the BJP.

1- Anti-incumbency of Double Engine: Although BJP claims double engine as their strength of development on the ground but proving to be the weakest point for BJP as the public is annoyed by inflation & unemployment. Chief Minister Yogi Adityanath has nothing to tell about his achievement except polarisation in the name of Hindus & Muslims and ramming bulldozers on criminals while PM Narendra Modi doesn’t give any clear roadmap of development. He has failed on many occasions to deliver his promises.

2- Covid Mismanagement: Yogi Adityanath’s biggest failure was the Corona Mismanagement and the public has not forgotten the havoc they faced in the second wave of Covid Pandemic in 2021. People are running here and there for oxygen cylinders and the government’s health infrastructure had completely collapsed. People still remember those scary days which BJP wants people to forget as soon as possible.

3- Farmers Agitation: Farmers’ Movement against 3 Central Farm Laws is another reason which makes BJP lose UP Assembly Polls. Sanyukt Kisan Morcha is also involved in campaigning against Narendra Modi Government as it has not fulfilled its promise made to farmers in order to end the farmer’s movement on the border of Delhi.

4- Jayant Chaudhary Factor: Akhilesh Yadav’s alliance with Jayant Chaudhary is also proving to be helpful to him as Jayant brings the goodwill of Chaudhary Charan Singh with him. His father Chaudhary Ajit Singh who passed away a few months back has played a very crucial role in order to support Rakesh Tikait.

5- Elections Manifesto: BJP has released a vague manifesto with nothing specific commitments while Samajwadi Party has given a detailed Election Manifesto with certain and quantifiable commitments. 300 Units of free electricity and restoration of the old pension scheme may prove to be the trump card for him.

6- Akhilesh’s restraint: Though BJP has been providing Akhilesh Yadav by several name callings like Abbajaan, Tamachawaadi, or Namazwaadi, so far Akhilesh Yadav has shown tremendous restraint and not reacting any of these frivolous provocations.

7- Azam Khan: One of the senior-most leaders of the Samajwadi Party, Mohd. Azam Khan is in jail for the last 2 years and there are about 87 cases lodged against him. However, he has been given bail in 87 cases but the Yogi Adityanath Government is anyhow stalling his bail in the last 3 cases. These actions of the BJP are whipping lots of sympathies in favor of Akhilesh Yadav, especially in the regions where the Muslims are in pretty good numbers.

8- Tickets Distribution: Ticket distribution to candidates is another reason where Akhilesh Yadav has gained lots of strength. Where BJP has faced feud due to tickets distribution and its rebels are leaving the party, Akhilesh Yadav has managed this crucial factor very well. He is meeting all the aspirants and making them understand the importance of remaining united. His pacifying skills are making him a leader of tomorrow.

9- Pre-Poll Alliances: This is the biggest advantage Akhilesh Yadav gained over BJP and he was able to stitch with small parties, especially the OBC parties like SBSP, Mahaan Dal, and Apna Dal (K), He did not go for the alliance with larger parties like Congress in 2017 and he was able to bring OBC Leader Swami Prasad Maurya on his side.

10- Attack on BJP Policies: Akhilesh Yadav is clear about his political enemy in UP so he is taking head-on with it. He is systemically attacking BJP’s policies while BJP is busy with its negative campaigning.

11- Akhilesh Yadav’s good work in the last term: Akhilesh Yadav has done some really good jobs during his last term as Chief Minister of Uttar Pradesh from 2012 to 2017 and he is asking people to vote for him on those developments. Lucknow-Agra Expressway, Metro in Lucknow, Laptop Distribution, Dial 100, 1090 Women Power Line, 102 Ambulance Service are a few of the good works done by Akhilesh Yadav.

Read More:
http://UP Assembly Elections 2022: Where is it going after 2 Phases of polling?

RELIGIOUS ISSUES COVER UP THE GOVERNANCE FAILURE IN UP