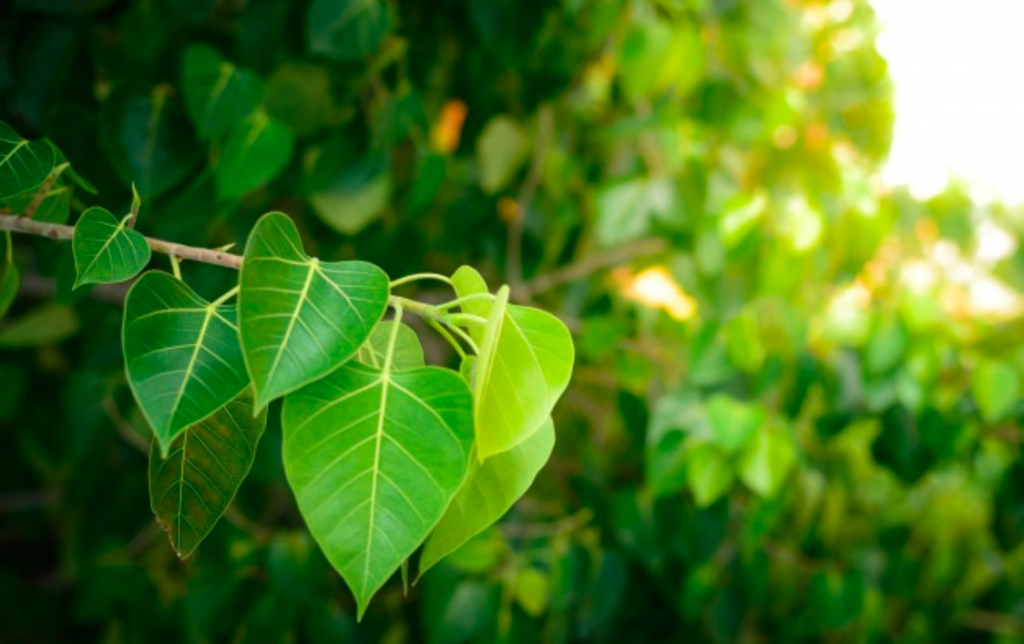 The Peepal: Connecting Earth to Heaven

I was astonished to see the Peepal Trees (Ficus Religiosa) on either side of the road in “The Garden”, a residential colony in Dubai when I went to see my grand daughter. As the name suggests, the area is full of greenery. Marvellous attempts are being made to transform the Kingdom of Dubai as one of the green cities of the world .The success behind the accomplishment has been possible mainly due to the wisdom of His Highness Sheikh Mohammed Bin Rashid Al Maktoum, Vice President and Prime Minister of UAE and Ruler of Dubai. Why were Peepal trees chosen to be planted in such large numbers in Dubai? The choice of Peepal tree denotes great depth of knowledge about the trees by the people behind these plantations. The tree is full of medicinal properties and is useful in creating healthy environment. His Highness is following the wisdom shown by his father who preferred Neem trees in the Karama area of Dubai.

The role of shrubs and trees is immense in our lives. Like Tulsi (Basil), the queen of herbs that is revered both in Hinduism and Islam, the Peepal tree also occupies almost a similar status. The Peepal is most familiar evergreen tree in India highly cherished and exalted since ancient times. The tree is supposed to be an abode of Gods and Goddesses. It is considered as a sacred tree throughout the ages in most of the religions. That is why it is also known as Ficus Religiosa or sacred fig. The roots of the tree reach deep into the earth and its branches reach high up in the sky denoting a link between the earth and the heaven.

During Vedic times, it was known as Ashwattha or the tree of life. Ashwattha is abode to all gods. Its’ roots represent ‘Brahma’ The Creator, trunk ‘Vishnu’ The Preserver and branches ‘Shiva’ the Destroyer. It has been referred to as World Tree in some religions. The deceased souls find blissful response as such their ten days rites are performed under this tree. Meditation under this tree and circumambulation around are performed to gain knowledge and fulfilment of desires. Gautam Buddha got enlightenment under this tree, therefore the tree is also called the Wishing Tree and Wisdom (Bodhi) tree. In Ceylon it is called Bo tree.

The Peepal tree attains a height up to 30m with extensive green canopy. The tree trunks are light grey and peels out patchy barks. The dark green leaves are heart shaped with long narrow tips measuring upto18x12cm size. They are full of fine network of venations. The dry processed leaves are used by artists for painting to create high value decorative. The fruits are up to 5mm size .The first life on the earth was green algae (Spirulina) that appeared around 2.3 billion years ago and proliferated into Plant kingdom. The Laramine Formation of Cretaceous Age consisting of shale and sandstone show plant fossils ,wherein the flowering plants (Angiosperms) were predominant and palms, lycopods and conifers existed in lesser proportion .The Ficus (Peepal) which is flowering plant was most common during geological past around 135Ma.(Million year).

Peepal is one of the oldest flowering plant of the world. The Indus Valley (3000-1700BC) Civilization has shown the existence of Peepal tree. The Peepal tree of Singapore Management University is 70 years old.

It is wonderful that human heart and heart shaped leaves of Peepal, both work continuously for 24 hours. The Heart pumps blood to arteries whereas, the leaves produce oxygen. In plant kingdom it is only the leaves of Peepal and Tulsi (Basil) which possess mysterious powers to produce oxygen round the clock. In general the plants capture Sun energy for photosynthesis. The cell structures together with specific memory for varying light conditions may be the reason for Tulsi and Peepal leaves to produce oxygen nonstop.

The leaves, fruits and barks of Peepal are full of medicinal properties. The chemical constituents such as Tannins,Saponins, Flvanoids, Steroids etc. are being used for preparation of medicines for various ailments. There is a traditional practice of applying leave extracts for inflammation, pain, wound healings etc. The saps are useful for treatment of Asthma, diabetes, diarrhea and dysentery. The diabetes, sugar and cholesterol are common health problems in Gulf Countries that can be treated with Peepal extracts. The fruits are highly useful for infertility and impotency .The regular use of dry powdered fruit with milk can cure sexual disorder. Utilization of plants for medicinal purposes in India has been documented long back in ancient literature. A major proportion of population mostly belonging to rural areas is still dependent on traditional system of medicines for their various health needs

The Canocarpus erectus (Acacia), which is a native of Florida was not a proper choice for Gulf countries.  It is creating negative effects in Dubai, Bahrain and other Gulf countries. There is nothing wrong if the preference of plant was not suitable to the environment. It gave insight to wise thinking today.

Thanks to the vision of His Highness Sheikh Mohammad Bin Rashid Al Maktoum, Vice President and Prime Minister of UAE and Ruler of Dubai for selecting Peepal and Nut tree plantations in the Kingdom. The Peepal trees in Dubai though do not attain great height, yet they are extremely useful for the environment. The realities and varieties of green existence have been explored by His Highness in the past and the city is continuously developing its bio diversity. It is exciting to visit the wonderful Holy Quranic Garden at Al Khawaneed. Quranic Park is an amazing park with nice fragrant flowers. There is greenery all around. You can see all 29 varieties of fruits and vegetable plants which have been described in the Holy Quran. The Garden in future will display 54 varieties of plants and herbs. The park is highly educative and is a new attraction to Dubai tourists. India which has such a fertile soil should take a lesson from Dubai.

Clear the air! It’s a habit, not your second identity

For a better world, our lifestyle must be based on as less resources as possible