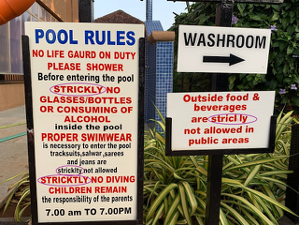 Signboard Spellings: They meant just that

My attempts to clear the photos saved on my phone got derailed once again. As I was going through them, I got distracted by this one. I remember the great time we had with our friends and their family at this Goa resort last winter but these two boards put up next to each other had stood out like the proverbial eyesore.

This was the first time I had seen the option of spelling ‘strictly’ four ways, forget ‘necessary’ and the way the sentences are split.

Please do not take it otherwise. I am no Angrez (English). Years of editing has affected my vision in such a way that errors seem to pop out. It does not matter if it is English or Hindi, mistakes rankle equally.

I fail to understand why people who spend money and effort to get a billboard or signage painted and fixed, do not spend a few minutes checking the spelling themselves or getting them checked. I shall talk about the error-filled menu cards of restaurants some other time when I start visiting them again and humoring myself with the blunders.

All of us have seen scores of such examples of faulty spellings sent, resent, forwarded and re-forwarded on Whatsapp, but I am sharing with you the following which I had not seen earlier. These are on our very own Bharatiya (Indian) boards and mere spelling errors; no misinformation, no wisecracks, no wrong meanings not wrong usage either.

I guess the one who tells the painter what to write as well as the painter himself, treat English as a phonetic language and write the words as they say it. If it was left to these geniuses, some of these words chosen off the cuff, would have spelled something like:

Read also
What did you do in the lockdown?
Washing Hands- Give soap a chance

Painters of food stall signboards are perhaps the best inventors.

The articles shown below aren’t literally edible even though the writer goes by their alternate usage.

I wonder if a tippler painted it after having one too many. Don’t miss the endorsement by the Punjab Police!

I did not know tasting those things is also a way of diagnosing ailments.

Why this attachment with the four letter body waste?

He writes as he speaks.

This one is the best because it spells ‘belt’ and ‘ear’ in the conventional way but has given fresh life to English with the other spellings he/she has invented.

If the lawyers choose to introduce themselves as such, I don’t think any of us should say much except Amen.

All this grooming and self-care, now try your luck in Bollywood.

Jo bola wohich likhne ka (Write exactly as I say), would thunder the Hindi film hero in his Bambaiyya (Mumbai) accent. The poor painter just did that to earn his bread.

Private business owners are not the only ones. Look at the laudable effort of the sarkari (government) agencies too.

You tell me, is that even a way to clean yourself? Actually I do have a few questions about it, but I don’t think it is proper to ask them.

According to Times of India, troubled by the wrongly spelled names of prominent places on the signboards put up across the city by the Tourism Department and the Public Works Department (PWD) in Lucknow, a local school boy SM Ayaan Rizvi, (then 12), had written a letter to UP Chief Minister Yogi Adityanath on April 7, 2018, to get the spellings corrected. He had included pictures of many such signboards. Fortunately, action was taken and the spellings corrected.

In the end, let us also honour the efforts of this gentleman from our cousin and neighbour country, who wishes to market his skill as a cock, as he himself says.

Yet another one more time