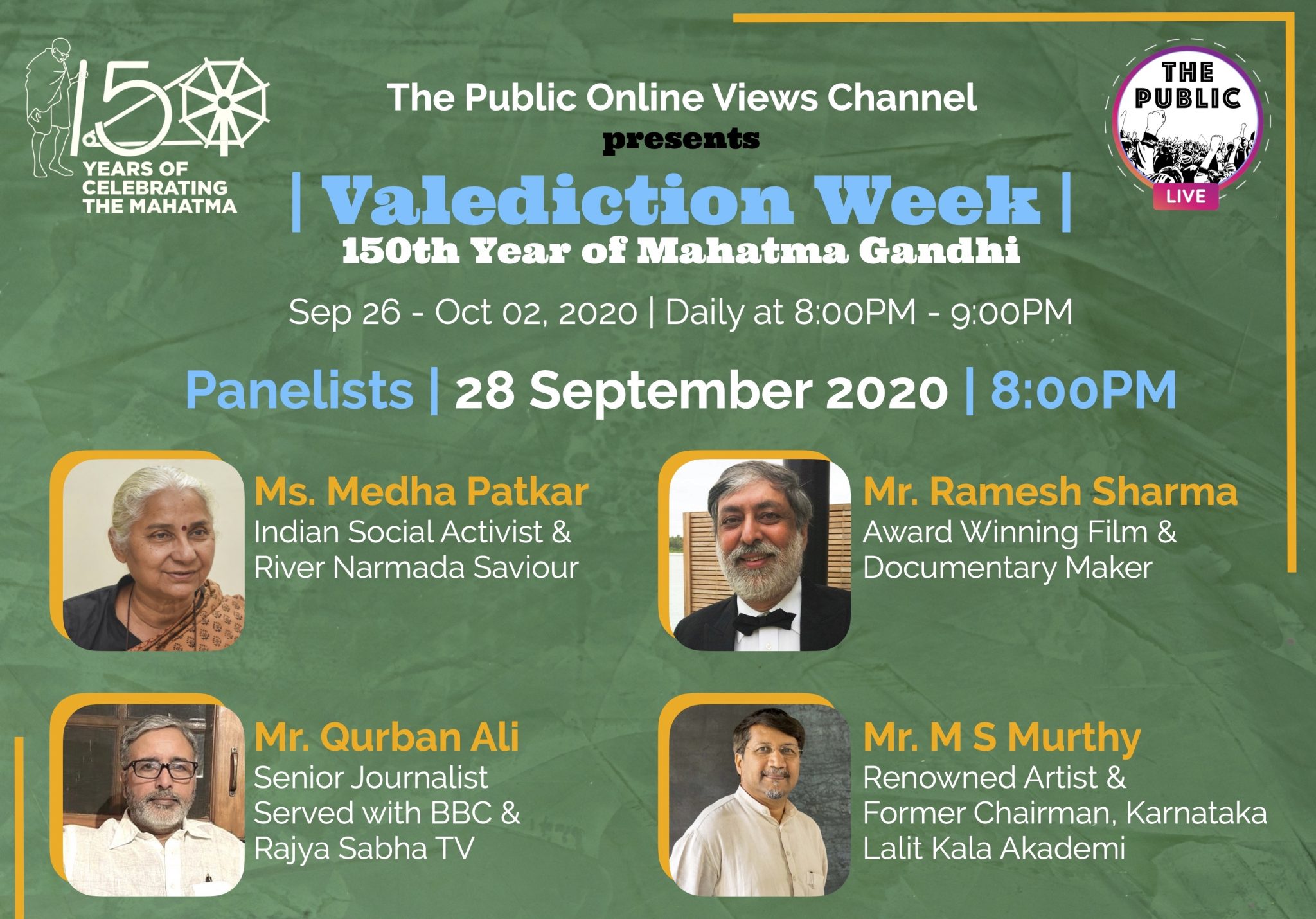 It is high time to move beyond mere tokenism when we commemorate Mahatma Gandhi, and begin truly embodying Gandhian values in all aspects of our lives. This rallying call was given by Medha Patkar, who is among the most respected development justice activists today. She was among the keynote speakers of the ongoing Valedictory Week to mark 150 years of Mahatma Gandhi being observed from 26 September to 2 October 2020 by The Public India.

Mahatma Gandhi had said, “I think of the poor of India every time that I draw a thread on the wheel of ‘Charkha’ (spinning wheel”.” Dr Sandeep Pandey, Magsaysay Awardee and noted Gandhian leader is spinning the Charkha daily, even during this online event. He said that Gandhiji showed us a path of simplicity that would give us a different kind of prosperity which is essential for just and sustainable development. Gandhian economy is the real socialist, sustainable, and equity-based economy. When we want to address the problem of employment, we realise that it could only be through production by masses and not mass production. So, the change must be in everything – in life, lifestyle, and sources of livelihood.

If we follow the Gandhian path then the lifestyle changes will again be based upon his conclusions, that the Earth has enough to fulfil every one’s need but no one’s greed. And hence our lifestyle needs to be based on as minimum resources as possible. Gandhi ji’s model becomes even more critically relevant when the world is reeling under financial meltdown and cascading humanitarian crises due to the pandemic.

Medha Patkar questioned if we treat the contractual workers and contracts between companies and the government alike? She said that because of corporate rule and growing dominance across the sectors, labour laws were diluted or abolished – 44 central Acts have been abolished or repealed. Our courts do not even equate the contract labourers with other labourers even if they are carrying out the same work. Social security and support that were granted to the disadvantaged sections within the working class earlier, are slowly vanishing. As the legal framework is being changed it is very clear that the contracts are being very vulgarly carried out between not just the labour and the employer but also between the millionaires or billionaires and the state (government) itself when the public sector units are being finished off.

She stressed that rapid privatisation of public services will also imply an end to the reservation which was to protect interests of the underprivileged and historically marginalised sections of the society. Based on the principle of positive discrimination, the benefits as per our constitution, which were being given as a matter of right, to those who come from underprivileged or needy sections of our population, are being rolled back.

Community is the real cooperative
If we are to deliver on the promise of sustainable development goals where no one is left behind, then the only way forward lies in cooperatives. Mahatma Gandhi had suggested that local community is the real cooperative, and he advocated for village republic (‘gram swarajya’ or self-sufficiency at local level). Medha Patkar said that cooperatives can usher an era towards ending contract-based system which provides the fertile ground for range of exploitation and abuse. Instead we are sinking deeper into contract-based system with the recent push for contract-based farming. Not only we have watered down laws and policies for our farmers, but the government has also got 3 ordinances passed during the lockdown which is going to make life of farmers even more difficult. Whether it was the struggle of Indians for freedom from British Raj or the struggle of landless workers against feudal landlords, Gandhi ji led people from the front in campaigns for social justice. Likewise activists who are deeply rooted in social movements and people’s struggles today, will have to step up and stand with those facing injustices.

Human rights get primacy over legal justice
Are criminal laws serving as a deterrent for hardened criminals and hooligans? Medha Patkar rightly emphasised on the critical need to give primacy to human rights and humane justice over legal justice. Dr Ram Manohar Lohia had said that Gandhi ji is his Guru. Dr Lohia led the Congress Socialist Party that had its root in Congress way back in 1934 for those who believed in socialism (presently active as Socialist Party (India) led by Pannalal Surana as its President and Dr Sandeep Pandey as Vice President). It is important to understand that even though there were differences in some viewpoints between Gandhi and Ambedkar, and Gandhi and Bhagat Singh, but all of them had unflinching commitment to nonviolence. In Justice Singhavi’s judgement Bhagat Singh had also stated that we cannot end exploitation and injustice with violence.

Medha Patkar said that the contractual system was opposed with non-violence and satyagraha means by not only Gandhi ji but also by Baba sahab (Bhimrao Ramji Ambedkar), Bhagat Singh, Marx, Dr Lohia among others. This is where the key lesson lies for all of us who want a just and social order for everyone: Nonviolence and Satyagraha.

Only option now is ‘Satyagraha’.
Reflecting upon current governance and context, she said that the only ray of hope lies in Satyagraha. When government itself indulges in shrinking or closing spaces for dissent in a democracy, that is also a form of violence. Violence is also being resorted to in name of ‘development’ or in form of slapping false charges and jailing activists who are known for their unwavering commitment to nonviolence, justice and truth, or in form of interference with every pillar of democracy. It is important to understand that if we do not act rooted in Gandhi’s Satyagraha then we will not be able to reach the goals we aspire to for a just and social order for everyone. Using any form of violence to reply to violent means can never be considered as a response, we need to clearly understand that.

We have also learnt from our social movements and people’s struggles that had we raised even one stone our campaigns would have met an early end. That is why real power and true hope lies in nonviolence and Satyagraha approaches of Gandhi. Absolute resolve, commitment and integrity of women and Adivasis of Narmada Bachao Andolan has been the backbone of the struggle. Ghar Bachao Ghar Banao Andolan (save homes, make homes movement) is another sterling example how people from different castes, religion, ethnicities, or regions united when over 75,000 houses were demolished. These are recent examples why nonviolence and Satyagraha approaches of Gandhi are not only relevant but the only path forward if we are to advance towards an equitable, just and fair world for everyone.