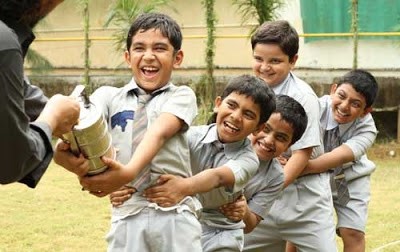 Yet another one more time

When I published my post the week before last, I thought I had shared all the interesting English words which were invented in India and which I knew. Yet within a few hours, some more started to play in my mind, and I for one, could not resist sharing them with you, thus this part II.

Co-brother: It started whenMr. Rakesh Misra pointed out the invention of the word co-brother and I am thankful to him for this. Co-brother is what the relation between the husbands of two sisters (Saandhu) is called in our country.However, when it comes to parents in law (samdhi) addressing each other, Wiktionary says they can be ‘co-parents in law’.

Mugging: Cambridge dictionary says ‘mugging is an act of attacking someone and stealing their money’, but do not be surprised to hear the word being used for rote learning in our country. We also say ‘mug it up for the exams’. I do not know if the etymology has the Hindi magga as the origin or vice versa.

Arranged marriage: Marriages are ‘arranged’ when the match is found by the parents of the young man or woman. They may do it with the help of relatives, friends, matrimonial advertisements or mediators and base it on several factors like caste, occupation, age, family background etc. The custom was also prevalent among the nobility in England in the Elizabethan times. “The major difference to Elizabethan wedding customs to a modern day marriage is that the woman had very little, if any, choice in who her husband might be. Marriages were frequently arranged so that both families involved would benefit. Marriages would be arranged to bring prestige or wealth for the family. The children of landowners would be expected to marry to increase the size of the acreage. A surprising fact is that young men were treated in a similar way as to women! Many couples would meet for the first time on their wedding day.(http://www.william-shakespeare.info/elizabethan-wedding-customs.html ). So, is arranged marriage a blind date for life? Remember, the parents of most of us had arranged marriages.

Love marriage: This obviously is the opposite of arranged marriage. This also means the couple fell in love, might have dated and been together for some time before they decided to take the plunge, with or without the approval of their families. There is also the surmise that the way Bollywood celebrates love marriages, it might be one of the factors for its growing popularity in our country.

Self arranged marriage: Only when Kalpana asked me a few months ago, I became aware of this third term.Put simply, this means the couple in question meant business. They chose their future spouses themselves, without any search operations by their parents or having fallen for each other.

Convent-educated: When talking of marriages, this expression came to my mind because in matrimonial ads in our newspapers this is still a popular qualification required for the brides. ‘Convent-educated’ or even ‘convented’ means somebody studied in a school which had English as the medium of instruction. Most of the times schools use the word ‘convent’ in their names even though there is no nun teaching there.

Homely: Do not be surprised to find the words ‘wanted a fair, beautiful homely girl’ in a matrimonial ad under brides wanted columns. Little do these people realise their words contradict each other. Homely (for a person), according to Merriam Webster Dictionary is ‘plain or unattractive in appearance.’ Collins Dictionary says ‘if you say that someone is homely, you mean that they are not very attractive to look at, e.g. The man was homely and overweight.’ It gets worse when you look at the synonyms and the antonyms for homely. I am sure nobody would want his daughter to be labeled as ugly, unappealing, unattractive when the opposite of homely is attractive, lovely, beautiful, comely. I guess what the advertiser wants to say is that the girl in question knows how to take care of the house.

These advertisements also sometimes say innocent divorcee. Does that mean the young man/woman in question was granted a divorce on grounds of incompatibility and not because they did something punishable by law and illegal or were unfaithful/cruel to their partner?

Another word used for divorced/widowed people looking for spouses a second time is ‘no encumbrances’. That points to the fact that children from a previous marriage could be a tricky situation to tackle for the new spouse, so hey, I am free. I wonder what their children to be born in future think of that.

We also use the word ‘issueless’ for people who have no children. Prime dictionaries do not mention the word, but Wordnik is liberal enough to explain the word the way we understand it i.e. having no issue or progeny, lacking children. https://www.wordnik.com/words/issueless

More better: Madhu didi(officially Dr (Col) Madhu Bhadauria) pointed out how some of us give weight to their words by putting two comparatives together. More easier, less worse, more higher. My ‘research’ tells me we can put two such words together only in situations like this-

Q: How many better people we need to hire? Are there enough?

Yet it gives so much pleasure when a child happy with what you have given to/done for him/her, beams at you and says in all sincerity, “Auntie, you are the bestest.” At that time there seems to be nothing wrong with the word. And that takes me to the use of the word auntie.

Uncle, auntie: I have said earlier that it is kind of impolite to call someone older to you by his/her name so everyone is a bhaiyya (brother) or didi (sister). Children are taught to say doctor uncle, guard uncle, saamne wali (the neighbor who lives in the flat/house opposite) auntie when the age gap is of several years. Everyone in their parents’ circle gets the title of uncle or auntie. In fact if my son called Shalini auntie and Amitabh uncle Mrs. and Mr. Sinha, even I might be horrified. The first time the absurdity hit me was when as a newly-wed I was invited to dinner by my husband’s colleague. Their son, who I later came to know, was three years younger to me, announced our arrival- “Mani uncle, aunty aa gaye.” Is it because we try to value relations? So, it does not surprise me when Amitaji’s grandson calls me dadi although given my own son’s age and position in life now, if I heard of becoming a dadi in reality, I might be a little perplexed.

Expired: When somebody says, “My grandmother expired,” that is because he feels died or passed away is too strong. He wants to soften the impact with his knowledge of English. Products expire but human beings do not.  And in the written form it might be he/she left for his/her heavenly abode. Really? Suppose I asked why if the deceased had an apartment in heaven all along, he/she chose to live on Earth, the grieving family might just send me where he/she has gone, with all the euphemism-lovers standing behind them and solemnly nodding their approval.

Tiffin box: The memories of the excitement over tiffin boxes opening and the eagerness to know what everyone had brought, then sharing it with friends, in school, brings a smile on everyone’s face.And what fun it was if you managed to stealthily open your dabba and finish your lunch when the teacher was still in class.Cambridge Dictionary says tiffin (noun) is ‘old use or Indian English’, a small meal, especially one that you eat in the middle of the day. The container, mostly two or three tiered which is used to carry it, is called a tiffin box. Earlier they used to be sturdy steel or aluminium stackable containers closed with a clip. Nowadays you also get stylish electric lunch boxes so that you can heat your food.

One by two: A very Indianexpression coined for use in Indian restaurants to order soup or dishes when they can be split in two to serve two people.

Head bath: It doesn’t matter what the rest of the world understands it as, head bath in India means washing your hair. Therefore, on days of festivals or auspicious days, one has to have a head-bath.

Lathi charge: When I read in the Cambridge dictionary explaining the word as a noun, Indian English, an occasion when a large group of police run forward in an attacking movement carrying their sticks, I felt as if it took the gruesome seriousness out of lathicharge, because mere running forward is not enough; they use it too on the mostly hapless crowd gathered to challenge the official diktat.

I have a doubt: We Indians do not raise questions, we express our doubts, e.g. saying ‘I have a doubt’ when somebody has finished speaking while in fact, we have a question to ask. Even the teachers ask after a lesson- any doubts?  Are they asking about the veracity of the information given in the class? No, they are also asking if anyone has a question.

Rowdy sheeter: Noun, Indian English, is a person who has a criminal record, says the Cambridge dictionary clearly. That would be a history-sheeter, curiously enough another Indian English ‘police term’ (Collins). The concept of “history-sheeter” has origins in the colonial era rule and its police surveillance codes. The legal codes allowed pre-emptive penalties against those listed as “history sheeters”, and these codes were copied into the post-independent Indian Penal Code Sections 109 and 110. The Indian states such as Rajasthan list a person as a “history sheeter” when “his or her criminal record reaches or exceeds thirty offenses.” https://en.wikipedia.org/wiki/History-sheeter

I am not an English teacher but having worked as a sub-editor for more than two decades, the reflex action is to pick out a word as soon as it pricks the mind with its unnaturalness.

One such word has been handwash for wash basin used in most of the tiffin centres and small restaurants in southern parts of India. I wish I could show a photo but given the situation, it looks like I am not going to a tiffin centre any time soon.

As we know, hair or kesh is one of the five Ks introduced by the tenth guru Govind Singh for all followers of Sikhism. So how do you tell the difference between a non-Sikh and a Sikh if both are clean-shaven or have short hair? You call the Sikh man cut surd. I find the expression a little strange, but I understand that it has been used for decades now, and how dare I challenge that?

We often say the ATM machine kharab hai/mein cash nahin hai (is out of order/has no cash) even though the abbreviation ATM itself means Automated Teller Machine. And then of course, there is the use of PIN number for Personal Identification number.

By the way, the headline used to be the catchphrase of my son’s chemistry teacher in middle school for repeat. He must have used it all his teaching life and is probably still using it.  So if some of his students pick it up and you hear it some time in your life, you should be pleased that you knew how it was invented. Bless him!